A Memorable Event by Laurence McGrandles

A two-day seminar with Howard Popkin and Joe Brogna.

As martial artists we tend to walk a fairly similar path. We try out a style, find it is a good fit for where we are at that time and we either stick with it, or as our life and needs change or we look for something new.

I started in Judo, passed through Karate and ended up at Jiu Jitsu so clearly I am not averse to trying something new or different. This meant that when a good friend and respected Aikidoka suggested (strongly) that I “must” attend a weekend seminar on Daitō-ryū Aiki-jūjutsu being given by Howard Popkin and Joe Brogna, I figured I “must”.

For those who may be unfamiliar Daitō-ryū Aiki-jūjutsu it is the parent art to many of today’s popular arts. Its founder was the now legendary Takeda Sokaku who taught Aikido founder Morihei Ueshiba. Other Daitō-ryū students went on to become the founders of Hakkoryu, Shorinji Kempo, Hapkido, and many other popular modern arts.

With my interest suitably piqued I signed up and began to wonder exactly what I had let myself in for. I had heard about the Aiki at the core of this system, it’s effectiveness making it possible to unbalance, redirect and control an attacker while using little or no muscular strength. This intrigued me.

The dojo, located in the Swan Centre in Ashford, Kent was a great location for the seminar. The dojo was a large, light and airy hall with great mats and enough room for the thirty or so participants to fit comfortably. Our host Phil Eyers of Genryukan Aikido (Dover) introduced our teachers for the weekend, Howard Popkin and Joe Brogna. Howard and Joe, both long time students of Okamoto Seigo the founder of Roppokai Daitō-ryū who was a student of Horikawa Kodo Sensei (the longest serving student of Takeda Sōkaku himself!) and both teachers of Daitō Ryū in Long Island, New York. This was to be the third annual visit by Howard and many of the participants were back for exactly that reason.
Howard and Joe spoke briefly on their background and then we were into it.

Howard demonstrated a technique and explained with eloquence and humour exactly what was happening. He also acknowledged that from the outside it was very easy to misinterpret what was happening as, what I like to call, “uke acting” but with everyone getting a chance to feel the technique from either Howard or Joe you soon realise there is no acting just a hell of a lot of technique. This was softness taken to a whole new level. As someone who practices a fairly “street” form of Jiu Jitsu I am used to the idea that my kotegaeshi is going to put you on the floor because otherwise your wrist is going to come off.

The lightness with which Howard and Joe executed the technique meant that on a number of occasions I found myself laughing as I fell to the floor a little unsure of quite how I had ended up there.
Mine was not a unique experience, as Howard and Joe mingled among us on the mat checking, correcting and congratulating. One Aikidoka performed a technique then exclaimed, “that was ridiculously easy” which Howard happened to hear and asked him to repeat to the room. “This”, Howard pointed out to us, “is the only flaw in the system, because when you do it right it feels like nothing”.

I went back to my hotel that night desperate to retain what little of the “nothing” I felt I had been able to learn.The second day built on the lessons of the previous day and we added some Jo and Bokken to the mix attempting to apply our techniques with the same lightness we had experienced the day before. Always the lessons and demonstrations were fuelled by humour and clear concise descriptions of what was actually happening anatomically.
Howard and Joe were always open to questions and constantly watching as we practised.

Of course all too soon it was over and finally we sat down on the mats as a group to ask questions and take a final opportunity to steal a little knowledge. Howard and Joe gave us their insights willingly and without ever making anyone feel they had asked a “wrong” or “stupid” question. They treated everyone on the mat regardless of age, sex, colour or grade exactly the same way, and that speaks volumes about them both, not only as teachers but people.

As I drove back to London, tired but very happy, I chatted with my fellow attendee, an Aikidoka of some years and we both agreed it had been a memorable event filled with friendly people and one that we were both looking forward to attending again next year. 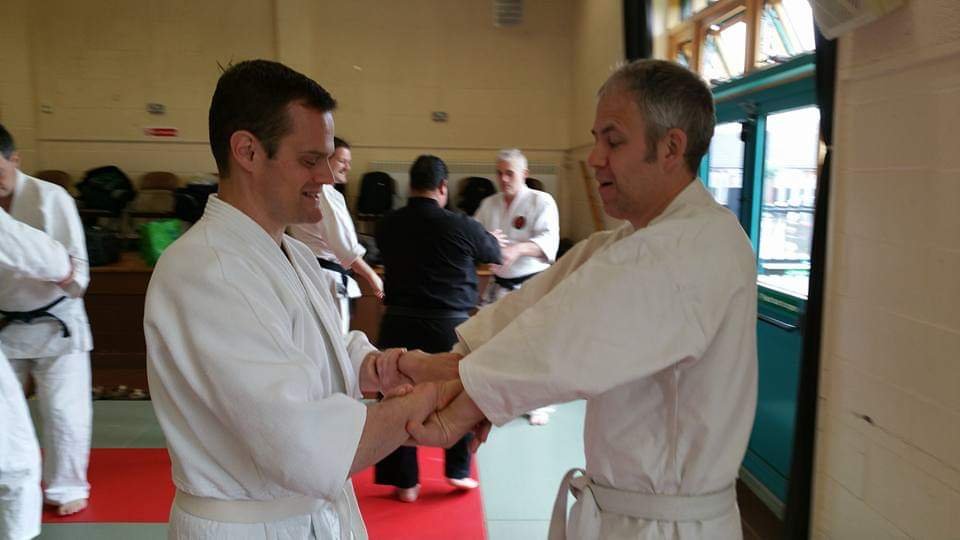