My own martial arts training started with Shaolin kung fu, then jujitsu. So since starting training in Aikido, my biggest battle has been with acquiring softness and trying not to use brute strength in techniques. As one part of my early investigations into aikido I investigated the source of Aikido, – Daito Ryu Aikijujutsu. I read everything I could on the style, watched many clips and began to integrate some facets of what I saw into my own training. It was hard, brutal stuff. Right up my Jujitsu street!
I also learned of a totally “soft” style of Daito Ryu with direct lineage to Takeda and so I bought the video on ebay to investigate further.

When I finally viewed it, I was very disappointed. There was this “Master” who was throwing ukes all over the place with no effort at all. And with seemingly no noticeable body movement
To make it worse, it was obvious that for much of the time some of his ukes were completely “throwing” themselves. I immediately put it into the BS category and never viewed it again.
In the intervening years, I’ve tried to improve my aikido and met other Aikidoka out of my immediate training circle, at various seminars.

Last year, one of those Aikidoka, Phil Eyers, organised the first UK seminar by Howard Popkin. Howard teaches the very same style of soft aiki that I had seen in that video. In fact his teacher was the very “Master” that I had been so unimpressed by a few years earlier.

But – the feedback after that first seminar was terrific. People who I had trained with were genuinely impressed and mystified by the techniques and principles that they had been taught over that weekend.
Now, these were people that I had trained with on several occassions. I knew something of their training history and the Sensei that they had learned from were all the “real deal”.
So, when Howard Popkin’s second UK seminar was announced for June 2015 it was clearly time for me to put aside my bias and pre-conceptions and see what it was all about.

The seminar took place over two days in Dover at the Genryukan Dojo.
Seven of us made the long journey down from Cornwall on the Friday and by the time we entered the dojo on Saturday morning, we were not quite sure what to expect at all. There were about 30 on the mat, including ourselves. Dressed in black Gi, Howard Popkin looked to me like a typical Jujitsu guy. I’ve since learned that indeed that is where his roots lie, in Goshin Jujitsu, and by his own admission, has had only three “aikido” lessons. When he came to a plateau in his jujitsu training, he looked elsewhere for ways to improve and advance. And that is when his journey into the “soft” side of Daito Ryu began.

Howard is a teacher in New York and his educationalist training shows. Clear, succinct. Very structured throughout but never boring or overly repetitive.
He has a very friendly, informal attitude that made everyone feel at ease right from the start. The first techniques we were shown were from seiza. All very gentle. No bang-crash-wallop stuff here!
Howard demonstrated them clearly, not only the movements but the breathing, the “intent”, the real underlying key principles etc.

The moves seemed on one level to be very simple and basic. Of course they’re not. But with perseverance, most of us seemed to be grasping the beginnings of what was required and were making a fair first attempt. What was really impressive, and something that I have not personally experienced at any other seminar was the amount of time Howard spent letting everyone “feel it” from him.

The techniques he teaches are by nature sublimely subtle and I found that a key part was to give/receive feedback from my partner.
I always do this in my own training anyway – if a technique isn’t working on me, I’ll let my partner know and allow him to ‘play’ with me, adjusting his techniques, helping him to move my kuzushi more , or to inflict more pain on me, if that’s what’s required.

What Howard teaches requires this even more, requiring you to work perhaps even more closely than you would in an aikido setup. Less Tori/Uke perhaps?
More co-operative. But not compliant. Nobody gains that way, as we all know.

I dont intend to give a blow-by blow account of techniques covered during the weekend.
Howard covered a lot of ground throughout the two days. From seiza, from standing, hand grab, striking etc.

Most of what we were being taught was not unfamiliar to us all. In terms of basic moves.
But the way that Howard taught it was illuminating.

As a jujitsu man at heart, I’m used to quite big hand movements and adding my body movement (tai sabaki) in to add to the power, to try to minimise using arm muscle power.
Now, Howard says I must stand virtually still. Not use my hips, use my whole torso instead. Subtly and internally. Move my uke a large distance, outside of his kuzushi by the very subtlest of rotations of my own body. And drop him by not using any power. Do it right and he’ll just fall down! (Because by that point he is relying on you to hold him up).
It works. Oh, it really works!

Many of the attendees had been at Howard’s first seminar, and so were a little familiar with what was required.
But even us ‘newbies’ were doing quite well, I think, thanks to Howard’s ability to spot every tiny mistake we made, and to offer a useful correction every time.

Again, a key point was all being allowed to uke for Howard on every single technique. When you see it, it can look very compliant. (As I had incorrectly concluded from that video, idiot that I am!)
And when we were learning it, working with each other, of course it often was. That’s the nature of our training isn’t it? We sometimes take ukemi when we maybe shouldn’t. All part of helping tori progress, in a way. But when Howard takes you… He takes you.

He is able to take your balance literally at initial point of contact. It feels both gentle and immensely powerful at the same time.
As they always say – It has to be felt……

Personally, no other seminar has ever had such a huge impact on my training goals. Enjoyable as all the others were, this is the one that I could instantly see would apply to both my jujitsu and my aikido. And I hope it will begin to move me onto the next level. I intend to learn from Howard Popkin at every opportunity and if you ever have the chance to study under Popkin Sensei, do it!
It has to be felt…… 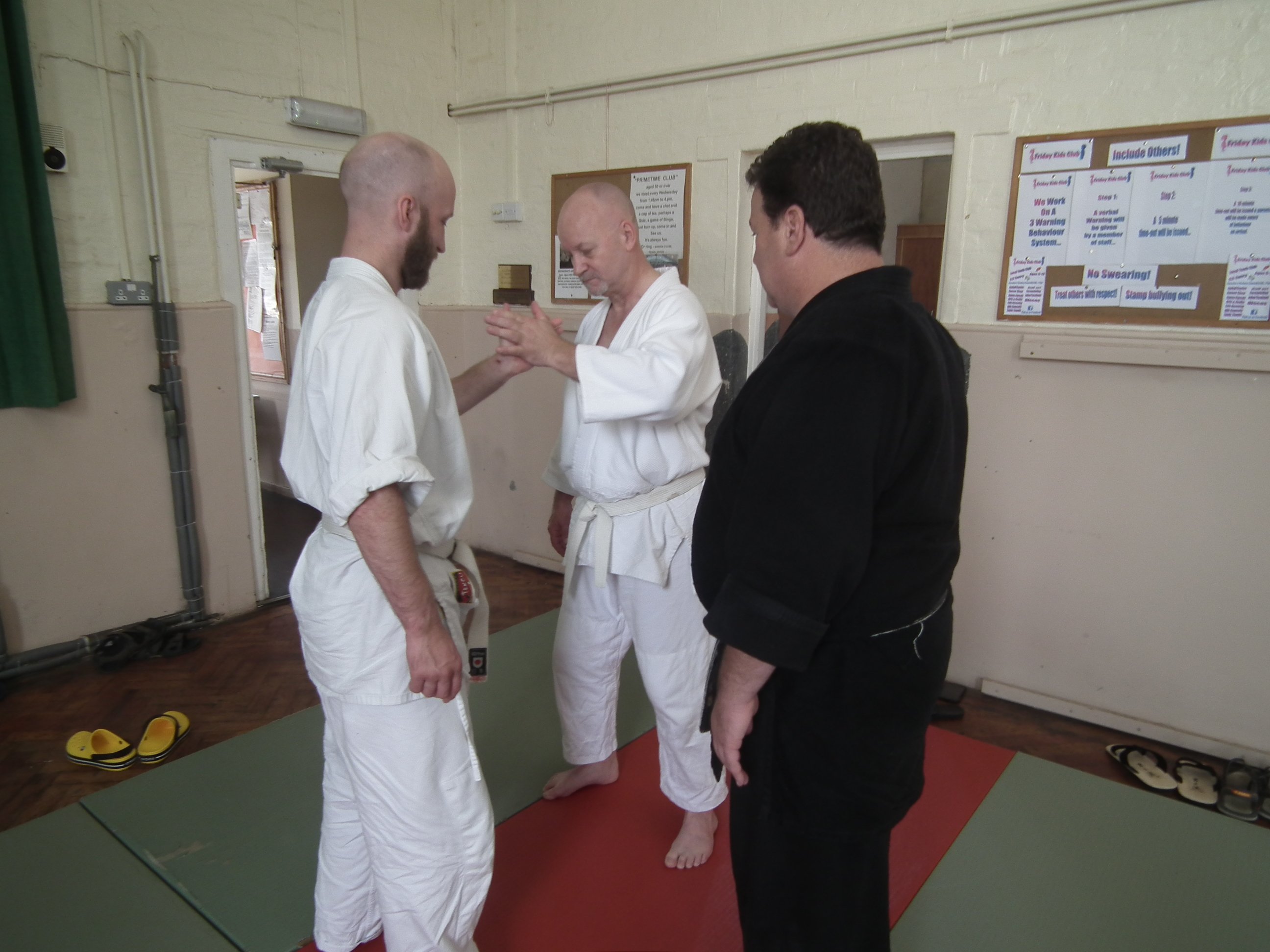